Veterans, active military personnel, firefighters, and police officers encounter terrifying events on a regular basis. Rather than numb a person or become “normal,” those events can create trauma and long-term emotional and physical damage.

Having PTSD is not a weakness. On the contrary, it’s a line of defense: PTSD is adaptive, in that it creates hyper-vigilance that can make the difference in a life-or-death situation. Yet, the rest of the time, that hyper-vigilance can lead to outbursts of anger, fatigue, and nightmares that make it difficult to interact with family, friends, or colleagues in non-combat situations. It’s that difficulty in adjusting that makes most PTSD suffers feel powerless – an especially frustrating feeling for those who have seen their own power in action.

PTSD is not just all in your head. It’s as much a physiological, bodily response as a psychological one. Nerves become overactive and remain that way, making it difficult to respond to non-traumatic stimuli in a balanced way.

Dr. Jason Attaman can help.  He helps veterans, military personnel, and first-responders overcome PTSD with a treatment known as stellate ganglion block.  With an office in Bellevue WA, our practice helps people throughout Greater Seattle and the Puget Sound area, though many patients travel from afar for help.  You can contact Dr. Attaman’s office to book a consultation, or read on to find out more about SGB treatment.

What types of problems lead to PTSD for military personnel or first responder?

Any type of violent encounter or terrifying event can lead to PTSD.  In your case, those events may include:

No matter what you have seen or experienced, you are not immune to PTSD, even if your line of work was a very conscious decision and you “knew what you were getting into.” Training can help, but it cannot make one immune to PTSD. It’s an injury to your brain and nervous system in same way a bullet wound can be an injury to muscle and bone.

What are the signs and symptoms of PTSD?

Symptoms may include intrusive memories and flashbacks, avoidance of the situations that trigger the PTSD, emotional distress like increases in temper, anxiety, and depression, and changes in physical reactions. Chronic pain, such as stomach pain, fibromyalgia, and migraines all have been associated with PTSD. In general, you feel on-edge all the time, and even more so in specific situations.

You might find you’re easy to startle, or that you have felt the need to use alcohol or drugs to function or at least “take the edge off.” You might get angry, have trouble concentrating, have trouble sleeping, or be overwhelmed with feelings of guilt, shame, or worthlessness. You might have suicidal thoughts and feelings. Yet there is hope.

What do you do to treat PTSD?

We use what’s known as stellate ganglion block. This therapy essentially pauses the malfunctioning flight-or-flight response. It’s essentially a hard reset for your nervous system, allowing you to respond appropriately to stimuli in the future. It can calm your overactive nervous system enough for other, more traditional therapies, such as talk therapy or psychiatric therapy, to work.

This “reboot” isn’t a panacea, but it is effective for most PTSD sufferers. Stellate ganglion block is affordable, can kick in after one quick visit to the office, and can bring a sense of control and balance back to your life. Call Dr. Attaman’s office in Bellevue today to book your appointment.

Certified by the Interventional Orthopedics Foundation 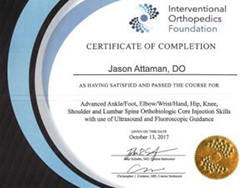 Dr. Attaman is certified at the highest level by the Interventional Orthopedics Foundation

Our treatment options include: