We are excited to discuss the use of Stellate Ganglion Block (SGB) for Post Traumatic Stress Disorder (PTSD). 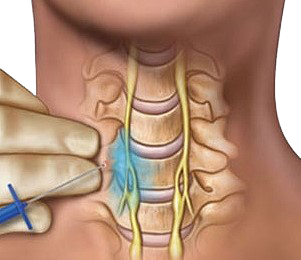 Post-Traumatic Stress Syndrome (PTSD) is a disorder characterized by a heightened response to a traumatic event. This can result in feelings of persistent stress, anxiety, and fear, even when there is no immediate danger present. Those who suffer from PTSD often avoid situations that remind them of the traumatic event or place and may experience flashbacks. Military members who have seen combat are at risk for developing PTSD and this disorder can be difficult to treat and may even prevent them from livinga normal life. It is often treated with various forms of therapy, medication, and at times, stellate ganglion block injections.

What is a Stellate Ganglion Block (SGB)?

The stellate ganglion is a bundle of nerves that is located deep in the lower neck. It is located within the cervical sympathetic chain. Sympathetic nerves play a strong role in our fight-or-flight response. Injecting local anesthetic (numbing medicine) around these nerves is called a stellate ganglion block (SGB). SGB can help reset these nerves that are thought to be chronically in fight-or-flight response. Stellate ganglion block (SGB) injections need to be performed under either ultrasound and/or fluoroscopic guidance as there are major blood vessels and organs nearby. The SGB injection is not new and has been used for decades to treat conditions such as chronic regional pain syndrome (CRPS) of the upper extremity. More recently, SGB is being used to treat PTSD.

The only physicians that are formally trained in the SGB procedure are Interventional Pain Management physicians. Physicians such as myself and Dr. Attaman learn how to safely perform SGB during a year-long advanced training program called a Pain Medicine fellowship. A fellowship is the highest level of training a physician can complete and is done after medical school, internship, and residency. Stellate ganglion block is a technically demanding procedure that requires precise image guidance using an ultrasound machine and sometimes a form of x-ray called a fluoroscope. We traditionally perform SGB for people suffering from rare types of chronic pain, but the technique is exactly the same when used to treat PTSD. The procedure is non painful, as it involves only a single needle poke in the side of the neck after numbing the skin.

Several studies have been performed in the past, analyzing the effectiveness of stellate ganglion block (SGB) for the treatment of PTSD. Although some results were favorable, the level of research was not ideal. Very recently, however, the first multi-site, randomized control trial was published the Journal of the American Medical Association (JAMA). The results suggest that two stellate ganglion blocks two weeks apart can help reduce symptoms related to PTSD. You may read the study below.

Watch the two recent broadcasts about SGB for PTSD from CBS this Morning and 60 Minutes, below.

During my active-duty service as a Major in the Air Force as a pain specialist and anesthesiologist, I treated active duty members and veterans who suffered from PTSD. While on tour in Afghanistan, I worked alongside those who had served multiple tours in combat zones and saw the negative impact PTSD can have. I was fortunate to perform stellate ganglion blocks on our soldiers and saw first-hand the positive effect it had on their mental health. Now that I’m a veteran myself, it’s my hope that I can continue to perform procedures such as this that can help those with PTSD improve their quality of life.

PTSD is a potentially debilitating problem for anyone who has suffered a major traumatic event in their lives, not just military members. Stellate ganglion blocks have shown promising results in recent studies and those who suffer from PTSD are encouraged to discuss the SGB procedure with a highly-trained physician. It is also important to know these injections are just one component of the treatment regimen and that continued therapy and medications under the direction of a mental health care professional are needed as well.

Cameron CartierDr. Cameron Cartier is an anesthesiologist, fellowship-trained in both Interventional Pain Medicine at the University of Vermont as well as Interventional Orthopedics with the founders of Regenexx at the Centeno-Schultz Clinic in Colorado. He is the only physician with such extensive qualifications in the state of Washington. If you are in pain, call Dr. Cartier's Seattle office (206-395-4422) or Bellevue, WA (425-247-3359) office.View all posts by Cameron Cartier »